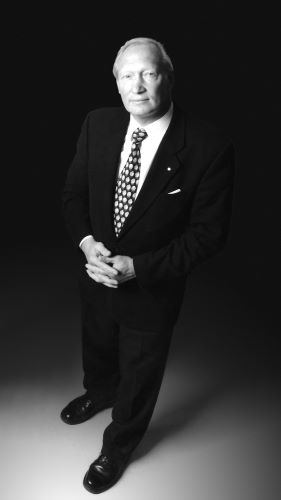 It is with great sadness that we announce the death of our friend and colleague Peter Robinson.

Peter founded our company in 1971 and although he retired a number of years ago he kept in regular contact providing valued counsel.

He had spent several years in industry working for companies such as Shell and British Shoe Corporation but he reached a point where he was keen to be master of his own destiny.  Having experienced many uncomfortable long car trips sitting on the faux leather seating that was used extensively in the late 1960s he was surprised at the excellent thermal qualities of the  sheepskin seat covers he encountered on European trips.   He tried to buy them in the UK but couldn’t find them. So he decided to make his own.

Sheepskin had been predominantly used for clothing and footwear, so when Peter arrived at tanneries looking for fleeces to be used as seat covering he was greeted with scepticism. He wasn’t put off  by the negativity he encountered and pressed ahead.  On a sales visit to London he met a salesman at  the Jack Barclay showroom in Mayfair who felt sheepskin seat covers were not for their customers but he revealed that Rolls-Royce had introduced close-fitting lambswool over-rugs as a standard fitment their Silver Shadow range. Whilst he was unable  to work with the factory he realised that the product could be introduced to other companies such as Aston Martin, Mercedes Benz Uk, specialist coach-builders and to the many collectors of cherished classic vehicles. These two products  have formed the cornerstone of our business.

Although he  developed a number of other companies which were unrelated to sheepskin products it remained main focus of his career. Peter felt that the long term survival of the industry was linked to finding niche markets which played to the many special properties of the material.

He was a man who enjoyed the creative process and work-wise was at his happiest when he was involved in trying to develop new ideas.  He enjoyed swimming against the tide and always took pleasure in wrestling with any challenge that presented itself, definitely a cool head in a storm. When things didn’t go as planned he refused to waste time and energy trying to apportion blame. He would help resolve the problem and move on.

Amongst his many achievements Peter was for many years the Hon. Sec. of the Real Sheepskin Association. Alarmed by the contraction of Sheepskin Industry, he and a small group of like-minded people set about trying to raise the profile of what we considered to be a noble but under valued material.  The RSA created awards for Graduate Students in Fashion and Furniture Courses. He and Chairman Andrew Tinnion spent many hours touring the country giving master classes in the many types and finishes of sheepskin. In addition he helped arrange for materials, mentoring and manufacturing facilities to be made available to students. As a result sheepskin garments and furnishings started to appear at Graduate events ( such as fashion week ) in much greater numbers. He was also the driving force in researching the use of mail-order as a marketing tool, producing a catalogue which showcased the many uses sheepskin.

In 2004 Peter was awarded an Honorary Fellowship by the University of Northampton. Recognised as a Champion for our industry Peter was invited to join The Campaign for Wool task force which had been set up at the request of H.R.H. The Prince of Wales.  In Northampton he was a member of a  group who were keen to find a proper home for the vast archives and resources of the leather industry.

On a personal front Peter loved video technology and could often be seen taking footage of events he attended, often adding his own special commentary on proceedings. Proud of his Swiss heritage he enjoyed skiing, making sure that our families and friends had the opportunity to  share the fun he had on the slopes.

He was a Founder Member of Northampton Nene Round Table and was an active member of Nene’s 41 Club until he moved to Somerset. Peter was a history graduate having taken his BA at Leeds University. This interest remained throughout his life and since his move to Barton St David he had been an enthusiastic member of the village history society.

Peter was great fun to be with. A kind and generous man who took great interest in life and all people he came into contact with. I remember a late night train journey when we were returning from a meeting in London. Sitting between us was a young man listening to loud music which was hissing though his headphones. While I sat there struggling to deal with aural invasion of my space Peter engaged with the young man, sharing ear-phones and spending the remainder of the journey discussing the relative merits of Drum & Bass vs Garage ( of which he had no prior knowledge ) Typical of him and just one of many times he brought a smile to my face.

We send our sincere condolences to Penny and daughters Zoe, Abi and Kate, their partners and the six grand-children of whom he was immensely proud.